Upon public demand, ARY Digital’s romantic drama serial ‘Pyarey Afzal’ is being aired once again commencing from 16th February 2015, Monday to Thursday at 11pm only on ARY Digital.

‘Pyarey Afzal’ was first aired on November 26, 2013 and ended on August 12, 2014. The popular romantic drama serial was directed by Nadeem Baig, written by Khalil-ur-Rehman Qamar and produced by Six Sigma Entertainment.  Hamza Ali Abbasi who came to prominence from this very serial plays the main lead.

Given the popularity of the drama serial, its last episode was screened in cinemas across Pakistan. The 8:00 pm finale coincided with Prime Minister Nawaz Sharif’s address to the nation and many believe ‘Pyarey Afzal’ drew more attention that night.

‘Pyarey Afzal’ is a story about the struggles of a lover and how with each impediment, his determination to win her grows stronger.

Hamza Ali Abbasi, who became a sensation from this drama serial and was offered a role in Bollywood’s ‘Baby’ which he declined due to anti-Pakistan elements, has expressed his joy upon the replay of ‘Pyarey Afzal’ on his official Facebook page. 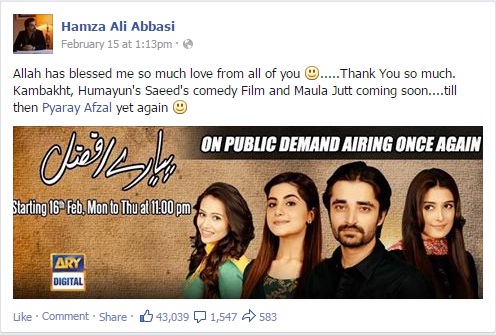 The last episode of ‘Pyarey Afzal’ was screened in cinema houses of different cities of the country and was the first drama ever in Pakistan to do so.

All the episodes of ‘Pyarey Afzal’ can be watched online here.