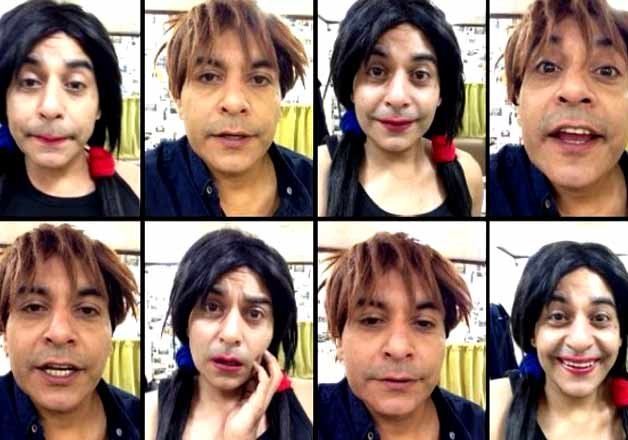 The internet is bombarding with unusual videos by different people on diverse topics but the most recent one spreading all over the internet are Shopkeeper and Chutki. Gaurav Gera is the mastermind behind all these clips and he has engaged all his viewers to lip sync his humorous jokes. Here he talks about some of his secrets that his fans did not know before.

1. Tell us something about your background as an actor.

I was born in Faridabad which is in Haryana and I spent a lot of time in Gurgaon and also in Delhi. I did a lot of theater in Delhi and Gurgaon after which I shifted to Mumbai, where I started acting but my main background remained theater.

I am also doing TV shows such as ‘Hansi Hi Hansi Mil Toh Lein’ on SAB TV, I am also anchoring a number of shows and I play various different characters in it, the other is ‘Comedy Classes’ on Life OK which is a successful show.

2. How did you come across the idea of creating such characters?

Basically I watch less of TV and movies but I am a big internet freak, so I have been watching lots of international work and I wanted to create something which was different and unique. So I thought of creating a girl, then I created her brother Chutku and with the passage of time, I also thought that a boyfriend would be good or else the story would get very limited between siblings. So I created Suyesh and Shopkeeper just happened, and along the lines the neighbor also came in so it all happened with the importance of story-line.

I play all these characters on my own as it becomes economical for me. I am always with me I don’t have to organize any dates, no tantrums so it’s easier for me to cast myself. I carry the wigs with me at all times hence I am ready to shoot.

3. Explain in detail the unique looks of each of your characters.

I have kept Chutki womanly, who is up-market but doesn’t know how to apply lipstick. Suyesh is deep voiced and a well spoken man who speaks in English and is up-market as well. Whereas with Shopkeeper I tend to create a status difference, he is someone who is not very well-educated and neither a cool dude. I differentiate them with the wigs, I take close shoots and I don’t bother much about the clothes.

4. What is the story behind shopkeeper? Why did you specifically choose that particular occupation as the character?

I choose shopkeeper because he is an important man in everyone’s life. Everyone has to deal with a shopkeeper, whether you order on phone or go personally and it is an indoor thing I don’t need to go outdoors. I don’t need an auto-wala, since Shopkeeper has everything with him. You can buy animals, food and fruits basically anything from him. I’m also thinking of making Chutki buy a plane from him.

There is a lot more to come with Chutki and shopkeeper’s story.

5. Which is your favorite character and why?

My favorite video is when Chutki goes to the shopkeeper and he has headphones plugged in and after calling out to him numerous times, he listens to her while she gets angry and goes away saying whatever. There is no joke in it but the situation is really cute as many people do this, my driver also does the same thing with me.

The other video is the ass-cream one I think it is so silly where Chutki takes it literally and she is in her own world and doesn’t realize that shopkeeper has a different accent, it’s so bizarre!

7. Are you planning to introduce any new characters?

I will bring in a lot of characters, but not right now but I have to keep rediscovering and introducing new people.

What is the worst and best compliment that you received on your videos?

8. What is the worst and best compliment that you received on your videos?

The best compliment is that people say that they believe that Chutki and shopkeeper are real and I wanted this to happen. I wanted to create something that would be loved by all and it happened. The worst feedback I have ever received is, “Why do you dress up as a girl?” People must look to the brighter side, that I take care of everything from playing other characters in addition to being the writer, editor and director also.

9. Do you ever wish to visit Pakistan or work for Lollywood?

10. Zaid Ali does inspirational stuff as well apart from comedy. Will you ever try your hand in making videos that have meaning and depth in them, apart from them just containing humor?

I have seen Zaid’s videos, they are really funny and he works really well and yes he does make inspirational work also. We in India have Varun Pruthi who makes inspirational stuff also. I think there are experts who are already making inspirational stuff. But surely I have already made one on exams; I want to play it with humor, nothing heavy at the moment.

11. How does it feel that millions of people across the globe as well as some prominent Bollywood celebrities have recorded their dubsmash based on your popular ‘shopkeeper’ voice over?

It feels awesome seeing celebrities making dubsmash, no one feels that much happy seeing their dubsmash getting made because there are different people in dialogue writing and in creating the whole scene but here, I am the solo person doing all the job and it makes me feel wonderful.

12. Any message that you want to share with the viewers?

Message for all is that we think too much and get stuck in tensions of life; we must focus on something creative and divert our minds. And I like happy faces so keep smiling.