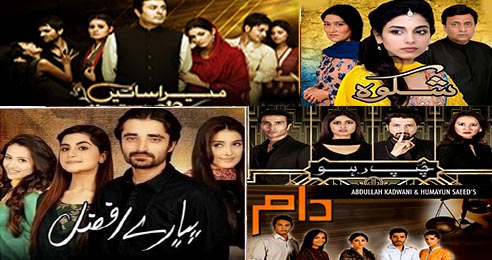 These 5 dramas are a must watch, and if you’ve already watched them, it’s time to re-watch!

‘Pyarey Afzal’ won big, clean sweeping the entire TV category at the LSA 2015. This drama has received immense love and popularity, not only in Pakistan, but across the border and all around the globe. Need we give you more reasons to re-watch this phenomenal drama? We suppose the success and recognition speaks for itself. This drama was aired not only once but twice on ARY Digital due to popular demand and given the popularity of this drama serial, it’s last episode was screened in cinemas all across Pakistan. The finale coincided with Prime Minister Nawaz Sharif’s address to the nation and many believe ‘Pyarey Afzal’ drew more attention that night.
If you still need more reasons, here is a little review that is guaranteed to tempt you to watch this ‘Pyara Drama’. It is a love story about our very own version of the ‘Pakistani Romeo and Juliet’. It’s a story about a boy, Afzal (Hamza Ali Abbasi) who falls in love with a girl, Farrah (Ayeza Khan) and the struggles that follow.

‘Chup Raho’ is a silent scream about sexual abuse. The drama revolves around a taboo topic that is usually covered up, hidden or ignored, especially when family members are involved. It was high time that the media took up responsibility in spreading awareness about such a sensitive yet important issue that the society often tells you to stay shush about. ‘Chup nahi raho’ and take a stand against this social injustice. The quieter you stay about these issues, the more power it gives to the abuser.
This is a story of Rameen (Sajal Ali), a woman who is subjected to sexual abuse by her brother-in-law, Numair (Jibran Syed). In an attempt to save her sister Manal’s (Arjumand Rahim) marriage and her own “reputation”, Rameen is forced to bear Numair’s indecent acts in silence.

Before ‘Pyarey Afzal’ , ‘Daam’ was probably one of the best recent times drama to hit your television screens. The story revolves around two best friends, Maleeha Sami (Aminah Sheikh) and Zara Hidayatullah (Sanam Baloch) and the price that the class difference has to pay. The friendship that had lived through everything during the school days finally shakes when hit by the real, more practical world. The drama highlights that social differences are easily accepted in friendship than they are in making new family relationships. It brings to light how status matters in this materialistic world and how Zara sells her feelings for a price offered by none other than her own best friend.

‘Mera Saaein’ is a political drama highlighting the life of a traditional feudal lord and politician, Malik Wajahad (Noman Ijaz). The story revolves around his persistent pursuit of a male heir and how that ruins the lives of many women. While he possesses the power to influence the lives of others, he finds himself powerless, desperate and struggling for a son. It is also a story about two best friends who become rivals; Naina (Aamina Sheikh) and Shazmeen (Sunita Marshal). The drama is followed by a sequel, which further proves its fame and popularity.

This drama highlights the relation most parents have with their daughters, and how they often worry about their daughters’ behavior affecting them later. ‘Shikwa’ discusses the popular idea that a daughter should be married off as soon as possible. In a desperate attempt to free herself from her responsibility, Munazza (Isra Ghazl), a widowed mother of three, marries off her daughter Meher (Sonya Hussain) to her cousin Saqib (Wasim Abbas), despite the fact that he is much older than Meher. The plot portrays the difficulties in adjusting to life with an older man and how a compromised married life can become a curse. ‘Shikwa’ is a complaint against this injustice that makes the entire life a compromise.