I am not erroneous if I say that distrust, jealousy, dishonesty and duplicity are the four elements which plays a vital role in killing a relationship of love. The story revolves around three pivotal characters Sherish, Ehtisham and Sania.Another episode of Shakk has been aired but still we all are waiting with the intention that who will win Sania or Sehrish. This episode is crowded  with slapstick situations which makes viewers laugh a lot. I love to share those hilarious situations over here. 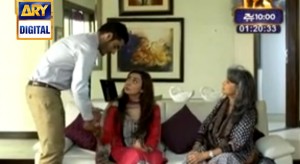 The way Sehrish has smiled on this situation was marvelous captured and acted. She was so pleased that her husband has treated her in an idealistic way but regrettably for few moments. 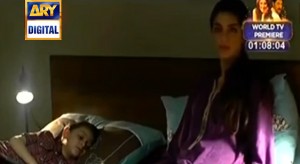 I could not understand what is that noteworthy element which is keeping Sham’s divorcing Sehrish. Sham’s role is infuriating me he has two wives and he seems alright with both of them. If he has made this plan to divorce Sehrish then why he sent a car for Sehrish’s medical test and why he went in her room for sleep even though he can refuse his mother just like he did when her mother asked him to divorce Sania but at that time he has taken a stand for Sania.

There is still question mark on a situation that Is pregnancy news is genuine or fictitious if its real then will Ehtesham leave Sehrish or not??

What do you think Ehtesham will meet the expenses of another home for Sania? Do share your valuable thoughts here.