Dil Mom Ka Diya is unarguably the drama that has taken the entire country by storm for its unprecedented storyline and the presence of an immensely talented ensemble cast. The drama revolves around two families and their transition from being super-happy to being extensively sorrowed. The first family comprises a man, Afzal and his siblings living in harmony, meanwhile, the second family incorporates a religious cleric, his wife, and two daughters. The drama also revolves around another girl, Tamkinat, who is the cleric’s niece.

Both families stay in a state of peace until one day, when Molvi Sahab gets a heart attack. Predictably, Afzal funds his treatment but to his shock, Molvi Sahab asks him to marry his daughter Ulfat and he agrees without even giving a second thought about it. When Ulfat finds it out, she panics but later agrees because of the deteriorating health of her father.

Both Ulfat and Afzal gets married but she starts misbehaving not only with him but his family too. Her cold-heartedness with his entire family angers him but he chooses to stay silent because of his children. Ulfat even claims her daughter to be just like her paternal aunt because one of them had chosen a name for her.

Quarrels between Ulfat and the family start to pick heat when suddenly her cousin, Tamkinat appears from another city. Afzal’s brother, Azhar instantly falls in love with her and displays a desire to get married in front of his brother. Albeit Ulfat’s disapproval, they tie the nuptial knot.

Ulfat aborts her child and gets beaten by Afzal that results in her permanent departure from the home. But she doesn’t stop there, she leaves no stone unturned for the divorce and finally gets it amid an abundance of hullaballoo in Afzal’s office. She starts living with her mother but she leaves her too, to live with one of her friends.

In her absence, Afzal gets married to Fatima and as a revenge, she gets married to Tipu. Tipu is a handsome young man but he eats ‘Paan’ that often keeps Ulfat away from him. Ulfat becomes pregnant again but she could not get an abortion anymore so she decides to keep the baby. But one day she falls and loses the child. Tipu thinks of her as a bad omen because his shop catches fire. One day, he rushes home and takes away all her savings and jewelry.

Tamkinat and Azhar get separated because of Ulfat. Azhar tells Tamkinat that he frees her but they are not yet divorced. In his absence, Tamkinat finds herself surrounded by hungry monsters but her sister starts living with her. Azhar finds out that he is still married to Tamkinat through a friend and he rushes back.

The last episode unfolds with Ulfat and cancer-struck Tipu having a conversation. He asks to bring medicines and she says that no money is left and the only thing to be sold is her. He asks her to even sell herself but do something. Akmal comes to Afzal and tells him he will “kill them both” if Azhar brings Tamkinat back. During the family conversation, Afzal becomes very guilty for punishing Tamkinat for the sins she never committed. When their elder sister tells Azhar that she will not support him in bringing Tamkinat back, he replies, “I don’t even need you. What was her fault in all this?” He asserts that he is going to bring her back and urges everyone to let him go.

Tamkinat and her sister pray together, followed by a door knock. Azhar stands in front of the door, begging for forgiveness with swollen eyes. She shuts the door and runs to her room. Afzal apologizes from her sister but she insists to set Tamkinat free. Azhar says that he can never repeat the same mistake again.

Ulfat and her husband go to a government hospital for his treatment but they turn the couple down. He asks her to visit one of his acquaintances but he asks her for immoral favors. While her husband tells her that no one does any favor in the name of God anymore, she thinks of her ex-husband and how he used to donate money in the needy people. He says, “I know you will leave me one day.”

Tamkinat becomes uber angry and asks him to leave. She exclaims, “I want to let Azhar know that I am me and not Ulfat.” Azhar tells her that he will come every day till she forgives him by heart. Ulfat takes her sick husband to the hospital again and asks the officer to get him a bed because he cannot even sit. On the other hand, Akmal warns Afzal that he will leave home if Azhar brings Tamkinat back.

Azhar comes to Tamkinat’s residence again but she asks him to leave. He then asks her to say it by her heart and she’ll never see him again. She holds his hand firmly and pulls him to a room. She tells him every detail about the miseries she had gone through. He begs for forgiveness with a plethora of tears in their eyes. She finally accepts his apology.

Ulfat finally carries herself to go to Afzal for help. She stands in the line of needy people who are given some cash by Akmal. Akmal hands some money to her and she asks him for more help from his brother and leaves. Akmal finally finds out that she’s Ulfat and he tells this to Afzal with tears in his eyes. This reaffirms his faith in the God almighty and his powers. He says, “She has come to the same place for help where she once tarnished our respect.” He invites her over the next day for more money. She comes and Afzal decides to pay her the amount, a moment of wind unveils her face and her big eyes, full of tears and regret. Afzal and Akmal get astonished to see her like that but he still gives her the money with an exchange of a million words in silence.

Azhar brings Tamkinat to home and everyone embraces her with warm hugs and respect. Azhar’s elder sister does the same and they all smile, exhibiting contentment. Later that day, Afzal sits in a chair, takes out a photo with Ulfat and says, “I can’t stay angry at you” with tears rolling down his cheek.

Dil Mom Ka Diya is admired by a huge number of people for all the right reasons. Foremost, the drama doesn’t revolve around the elite populace of Pakistan. It rather sheds light on the issues of average families so that a lot more people can actually relate to the happenings. It also touches upon the importance of Karma in everyone’s life; you cannot have a happy life after making someone feel miserable. One of the most pivotal lessons this drama has given is that the age or face of a human being never matters. What matters is the gratitude in his heart and respect in his eyes.

This potpourri of love, hatred, ego, sacrifice, revenge, and karma has officially transcended all the records by being the extensively watched drama on the respective timeslot on any Pakistani channel. What are your views on Dil Mom Ka Diya? Have your say in the comments’ section below. 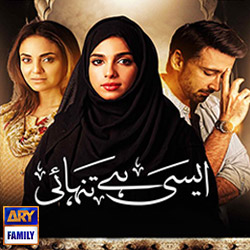