Hamza Ali Abbasi has been in controversies since the first teaser of Jawani Phir Nahi Ani due to his Facebook statues and views but still the first official trailer of the movie managed to win the heart of the viewers.

Hamza is very smart and is well aware of how to engage his fans with his new movie. Recently he posted a status sharing his views about his new movie: 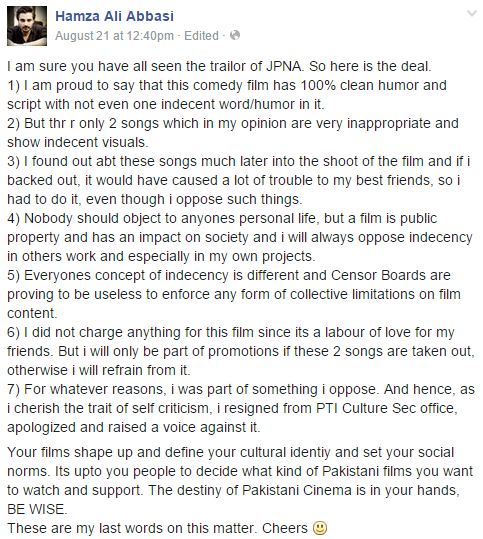 He updated his Facebook stating that the upcoming comedy film is 100% clean but there are two songs that he deems indecent and vulgar and if they are not taken out of the movie he refuses to take part in the promotional activities. Well, posting a status like this and having more than 15000 likes and  a 1000 comments is one of the controversial ways to promoting his new movie.

However Mohammad Jerjees Seja CEO of ARY Digital Network also shared his thoughts on Hamza’s status and told him that though he respected his opinion, it was his suggestion that Hamza Ali Abbasi should not criticize his friends’ work.

Jerjees is also co-producing the film with Humayun Saeed and Nadeem Baig’s Six Sigma, actor Humayun Saeed refuted Hamza’s claims of not getting paid for the movie and stated that the actor will receive remuneration.

“He hasn’t asked me for the money, yes that’s true. But he is being paid. I don’t know if he has already received payment because I haven’t checked with the accounts department but he will be paid the amount stated on the contract he signed.” said Humayun Saeed, talking to a local reporter.

Saeed further goes on to say that “I do not promote vulgarity or indecency and am very careful about these things. This is a very clean comedy film. Even Hamza himself states that the movie is 100% clean and it is the song that he has an issue with and he has a right to his opinion. We can not take the song out of the movie.”

So here is the trailer of the movie and one of the best part is when Sohai goes like this party is going to be rocking mentioning the OMG and MA which has already been very addictive. There is a huge hype surrounding Jawani Phir Nahi Aani, which is releasing on Eid -ul- Adha and it is a must watch.