Humayun Saeed at the #FairNLovelyKaJalwa launch!

Humayun Saeed at the #FairNLovelyKaJalwa launch! 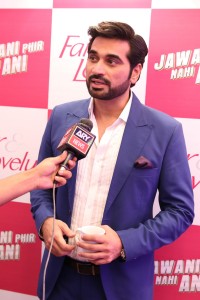 Pakistani superstar Humayun Saeed was spotted on Thursday 26th August 2015 at the launch of the first song, #FairNLovelyKaJalwa, of his upcoming movie Jawani Phir Nahin Ani.

The launch was at Movenpick Hotel (Karachi). Humayun Saeed was seen in a crisp blue suit by Humayun Alamgir.

The event was attended by few cast of the movie and Humayan Saeed was one of them. The event was good and the audiences liked the song a lot.

His wife Saimna Humayun Saeed accompanied him to the launch, the song #FairNLovelyKaJalwa was officially released on 26th August 2015. The song has taken over the social media, you can watch it here:

Thank u for the overwhelming response 2 #FairAndLovelyKaJalwa I can promise u all there’s much more exciting stuff in the pipeline of #JPNA!

Humayun Saeed is also the producer of the movie besides being the lead actor, has promised exciting stuff from the movie. Jawani Phir Nahi Aani, will be releasing on Eid -ul- Adha 2015.

#JPNA will be screened worldwide across the USA, UK, India, Africa, and Australia.