‘Beti’, all set to shed light on an important social issue 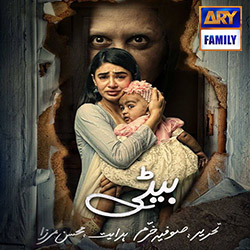 ‘Beti’, all set to shed light on an important social issue

Since the old ages, this myth has prevailed in our society, that the daughters are considered to be a sign of bad omen. Though our religion completely refutes this notion and provides equal rights to them. ‘Beti’ is an amazing story of a daughter who faces this challenge as she gets married in a family where baby girls are not welcomed. Her husband’s grandmother is very aversive about the birth of a baby girl. Maryam now defends herself and her baby against all odds.

Maryam, played by Saheefa Jabbar Khattak, is a young and educated girl who finds herself at odd as she gets married in the family with a naïve mindset. She stands a firm ground to protect her baby girl at all costs.

Ashar, played by Fahad Mirza is Maryam’s husband who is the beloved son of the entire house and is expected to give baby boy to the family. Ashar and Maryam are struggling to maintain harmony in their relationship and faces all the wrath of the grandmother whose evil intentions against daughters have made her hysterical.

Hasan Ahmed as Taimoor and Zainab Ahmed as Sonia are Ashar’s elder brother and sister-in-law, who are also victimized by the family pressure. They blame their daughter’s death is due to grandmother’s ill wishes.

Javed Sheikh as Hashim is Ashar’s father who has followed his mother’s command all his life and now he supports her in all her endeavors.

Asma Abbas as Shahana is an old-fashioned grandmother who despite being a woman, wants a baby boy in the family and is willing to go as far as it takes to achieve her objective.

A daughter is the blessing to the entire family as she lays the foundation of the family, but most people still need proper education and knowledge, for that matter.

This potpourri of immense agony and a plethora of emotions is all set to send chills down your spine from Tuesday at 8:00 PM, only on ARY Family.