ARY Family’s “Bandish” is the reality no one talks about 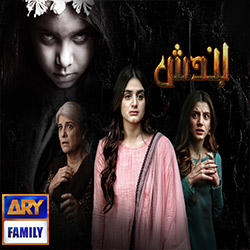 ARY Family’s “Bandish” is the reality no one talks about

Black Magic is a bitter reality of our society and is used for various intentions. ARY Family’s newest visual treat, Bandish shows the suffering of a family that is under the influence of Black Magic.

Madiha, played by the legendary Marina Khan has a loving husband and three beautiful daughters. Her life is perfect until a woman starts performing black magic on her family.

Junaid, played by the veteran actor, Sajid Hasan is a man who always keeps family first. He does not believe in the concept of black magic.

Sania, played by the gorgeous, Hira Salman is the eldest daughter of the family. She keeps getting rejected by all her proposals because of the effects of black magic.

Hania, played by the immensely talented, Zubab Rana is the second daughter of the family. She is in love with Hamza who lives in her neighborhood.

Aleena, played by the adorable, Hoorain is the youngest daughter of the family. She is possessed by an evil spirit that makes her do odd things.

After a plethora of strange events, Aleena is unable to remember what had happened to her since all the three sisters are affected by black magic, but they still try their best to protect each other.

Sumbul, played by Farah Shah, is a woman out for revenge and leaves no stone unturned to destroy Madiha and Junaid’s family.

Hamza, played by the heartthrob, Fahad Sheikh is in true love with Hania. He supports Hania and her family during their difficult phase.

Sandal, played by Zainab Ahmed, is the secretary of Junaid and joins Junaid’s office with bad intentions.

Bandish, a story that depicts reality, incorporating jealousy, insecurity, and greed, is all set to show you the audacity of people to destroy others from January 21st. The drama will be aired every Monday at 8:00 PM, only on ARY FAmily.