The Teaser Of ‘Lahore se Aagaye’ Will Get You Super Pumped Up!

The Teaser Of ‘Lahore se Aagaye’ Will Get You Super Pumped Up!

After the phenomenal success of the rom-com Karachi se Lahore, ARY Films and The Showcase Films have now paired up for Lahore Se Aagey which is directed by Wajahat Rauf with Yasir Hussain as the writer. Let us get you excited with breaking the news that ARY has released The Official Teaser of the film Lahore se Aagey! This fun filled movie is said to be released on the 11 November, 2016.

The teaser starts off with the gorgeous Saba Qamar flaunting her beautiful long locks and her killing smile which adds a little oomph to her appereance!  Yasir Hussain looks super cute while he follows her! (Adorable isn’t it?)

The picturesque view in the teaser has definitely gotten us super keyed up; the thrilling walk on the bridge and so much greenery is without doubt a feast for the eyes! The film seems like an enthralling fun ride that you DON’T want to miss out on. We can surely say that a good adventure is coming our way. 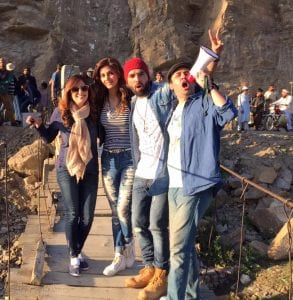 Above all the song, ‘befikriyan’ sounds like the perfect rhythm to ears, ‘dance away to beat’ kind.

The hype of this film has been going on since a while now, apart from Yasir Hussain who stole our hearts in Karachi se Lahore, the beautiful Saba Qamar –  Lahore se Aagey also includes some terrific people such as Behroz Sabzwari, Rubina Ashraf, Abdullah Farhatullah, Noor ul Hasan, Mubashir Malik and Omer Sultan.

You can’t deny that this teaser has gotten you extremely excited for Lahore se Aagey, well guess what? We can’t hold our enthusiasm too.

Also Read: Find Out What Lahore se Aagey Is All About