ARY Films has never failed to astound us, sometimes with Jawani Phir Nahi Aani and other times by Ho Mann Jahaan. The movies would keep us glued to our seats and hooked to the screens. This time ARY Films is introduced yet another rom-com, Lahore Se Aagey, which is a spinoff of the 2015 Karachi Se Lahore.

Lahore Se Aagey looks like a fun packed movie, flaunting some of the prettiest views of Pakistan, you might want to pack your bags and head for the North after watching the trailer. Director Wajahat Rauf spun his magic wand and went an extra mile on this film. What makes us say that? Well, the trailer looks promising and we’d like you to have a look at it too.

Countless fun filled moments, and humorous dialogues confirm that the movie is going to be yet another blockbuster, the added masala is the chemistry of the very hot Saba Qamar and the handsome hunk Yasir Hussain, these two certainly know how to grasp attention. 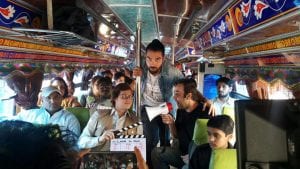 Actors like Behroza Sabzwari, Mubashir Malik, Rubina Ashraf, Abdullah Farhatullah, Noor ul Hassan, Omer Sultan and Atiqa Odho look fabulous and with the look of it, their performance is a cherry on top. 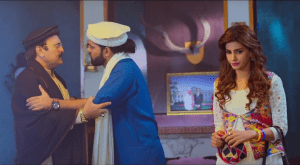 Besides the costumes, and those amusing thugs and various adventures – the movie has some very hip soundtrack, probably the next Mehendi tracks too. Those dance moves by Saba Qamar and Yasir Hussain are goals! All in all LSA seems like a very fun movie.

The film will be released across Pakistan on the 11th of November, so are you prepared for this fun filled journey which will without a doubt be the cause of your laughing fits.