The most talked about movie – Janaan is finally out, and there is no doubt that IRK Films, ARY Films and Reham Khan managed to break stereotypes as they promised. Janaan is a debut of Osman Khalid Butt as a writer and a directorial debut of Azfar Jafri, the entire team spared no effort with the promotions which kept them in the spotlight.

Janaan starts off with Armeena Khan leaving for Pakistan to attend the wedding of her cousin, she goes there with a lot of preconceived notions and what awaits her in Swat are the mountains which have never looked more scenic; undulating in emerald hues, looming over scenic lakes and pastures striped in yellow and green, a loving family and obviously two handsome men.

Bilal Ashraf who plays the character of Asfandyaar, is a serious and a mature young man who runs a school and has a very giving nature. He’s known for his generosity but the sole downside in his perfect cute looks, killing dimples and amazing personality is that he’s a hot head.

On the other hand Ali Rehman who plays the role of Danial is tagged as ‘Karachi ka shoda’ in the movie, and his flirtatious one liners are yet another cherry on the top!

A love triangle, highlights of the Pakhtun culture and some major family bonds is what you should look forward to in the movie, Janaan also flaunts light humor to keep the audience glued to the screen, for instance Ali’s character’s obsession with Facebook and Instagram and the grandmother telling the potential non-Pakhtoon groom to use Zubaida Apa’s whitening soap and get that fair and handsome look. 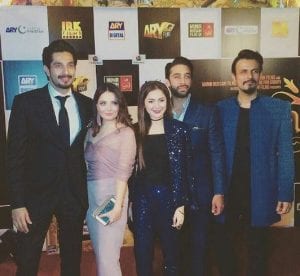 The soundtrack of the Janaan is a soulful treat for the ears. Apart from some terrific  costumes, beautiful fairytale like wedding, Janaan has delivered some excellent creativity, so if you’re fed up of the fact that our Pakistani Cinema doesn’t produce quality work – then you must go watch Janaan, don’t miss out on this emotional roller coaster, the movie has the substance that will make you laugh and get you teary at the same time – giving you that torrent of emotions.

Janaan Cast In Action! by arydigitalofficial